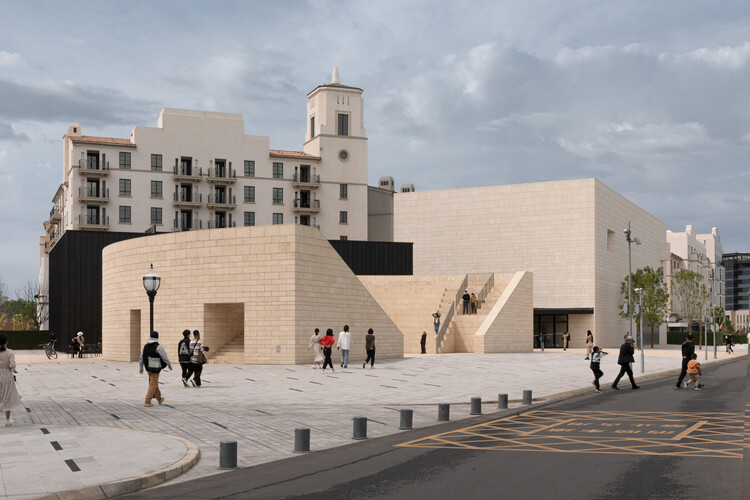 Text description provided by the architects. Aranya Theatre is located at an irregular-shaped site at the center of Aranya, a gold coast seaside resort in Qinhuangdao, Hebei, China. The site is surrounded by residential buildings on three sides, overlooking the sea across the dunes. Therefore, how to deal with the relationship between the theatre and the sea, streets, and urban context, as well as how to shape the public space of the town has become the focus of the design.

Break up the whole into parts. The building consists of three theatres -A Theathre, Fengchao Theatre, and Dionysus Theatre, each occupying a corner of the site. Two rectangular theatres, Fengchao Theatre, and A Theatre, are connected by the lobby in the middle, extending into the urban fabric. The outdoor Dionysus Theatre is located at the corner, connecting the streets on both sides and bringing the urban space inside. By breaking up an excessively large volume into three smaller units, the building integrates into the urban settings without being too obtrusive on the scale. Each of the three theatres has its own function, providing multi-functional places suitable for different forms of performance for the community, in order to create a diverse and vibrant community for all. The 300-seat Fengchao Theatre is used for professional drama performances, with professional equipment and an architectural acoustic environment. The plays of Meng Jinghui Theatre Studio and other pioneering experimental dramas will be staged here.

A Theatre is equipped with 550 seats, where the large and solemn space provides better experiences for its audience. It can meet the needs of a variety of functions from theatrical performances to concerts, exhibitions, performance shows, auto shows, etc.

Facing the sea, the Dionysus Theatre caters to outdoor performances. When not being used for performances, it serves as a city square on the corner of the street. With the functions of performance, party, relaxation, and sea viewing, the Dionysus Theatre acts as a socially cohesive area of the town. Meanwhile, it also provides the actors with the possibility of different stage sets and positions. The actor’s activity area will not be limited to the stage but can make use of various heights, angles of the space, and even traffic spaces to perform, inspiring innovative ways of performance.

TIENSTIENS café is located on the first floor of the Dionysus Theatre. Openings along with the cave-like space frame different views of the surrounding city.

Viewing vs Performing. The essence of theatre architecture is to deal with the relationship between the audience and performers. In contrast to the traditional theatre which is an enclosed space, the initial design concept was to open up the theatre where the stage takes the sea and the city as background. The stage set is juxtaposed with the real scene of city life, creating a unique seaside theatre. Therefore, at the beginning of the design, a fully openable door was designed at the rear of the stage in the Fengchao Theatre, allowing actors to enter the stage from the street. The city is thus becoming an extension of the stage, creating an immersive sensual experience. It is a pity that such a design needs to be highly integrated with the repertoire itself. In the end, considering the uncertainty of the repertoire, this idea was not carried out.

From another perspective, except for the interaction between audience and performers, the Aranya Theatre itself is a stage for the city, the events in the theatre reflect the Aranya’s urban public life. The design of the outdoor Dionysus Theatre, therefore, returns to the essence of drama—the interpretation of daily life. The open-air performance with dunes and sea as the background becomes the city’s repertoire, and the building itself becomes a deeply integral part of urban life. It connects the natural dunes and the sea with the urban setting to nurture humanistic culture in city life.

Materiality. The different materiality of the metal and stone façades endows the three theatres with different characters. The Fengchao Theatre, which is a traditional “black box theatre”, can accommodate 300 spectators. Both of the façade and inner space of the theatre are in black, reflecting the temperament of the Fengchao Theatre as a trailblazer of Chinese experimental drama. The interior design, surround sound system, as well as theatre seating optimize the sound quality within the theatre hall, providing optimal acoustics for the innovative art-making.

The Dionysus Theatre adopts a coral stone from the sea, with the original fossil pores preserved, reflecting its monumentality as an urban public space and implying its connection with the sea. The façade of A Theatre is relatively light in color, and the division of the stone follows the perspective rule of human eyes, depicting a circumbendibus beauty and rhythm.

The Fengchao Theatre and A Theatre are connected by the lobby, extending into the urban fabric. The ceiling structure adopts the triangular grid-like girder system to create a column-free space, which allows visual and physical continuity.

An open architecture complex, and a theatre that belongs to the city. We hope it to be not only a hub for performance -sophisticated and adaptable to multiple art forms, but also a social centre in Aranya that encourages social interactions as well as an innovative artistic collaboration.

Reading Spaces: The Book as an Architectural Element