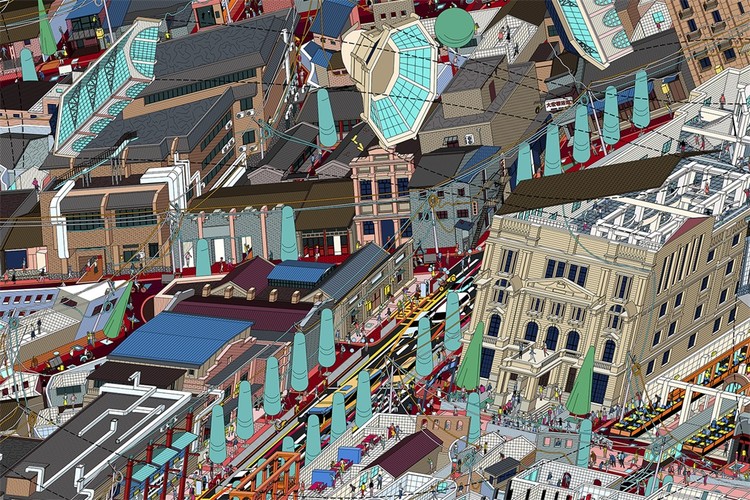 Architects who sketch appear to do the polar opposite of what architects do; architects transform drawings into reality, but they transform reality back into drawings with their brushes. They have been referred to as “Paper Architects.” Indeed, they use drawings to let people see the city through their perspectives and encourage everyone to pay attention to and reflect on the type of city we live in.

“Nan Luo Gu Xiang” extracts significant buildings and concentrates them into a single painting, an expression that mixes the real and the imaginary. Through oblique axonometry and twisted explosions, “Under the Zhengyang Gate “deconstructs and re-expresses the familiar Zhengyang Gate.

Beijing Drawing’s works are not only about the city but also its culture. Beijing Drawing’s founders, Song Zhuangzhuang and Li Mingyang, view their work as a means of rediscovering Beijing and developing a contemporary Beijing culture. When discussing Beijing’s culture, material culture such as the Forbidden City, Summer Palace, and Great Wall come to mind; Intangible culture such as Peking Opera, shadow puppets, and roast duck comes to mind as well. However, Beijing Drawing believes that everything in our lives has a cultural significance.

Beijing Drawing has been on a journey of discovery and interest in new and interesting content. And then to consider how to transform this interesting content into a usable material that everyone will embrace. These are investigations and manifestations of the city’s diversity. Their works strive out real-world issues, communicate them uniquely, and bring them to the public’s notice and discussion. Beijing Drawing’s work ” Will IT engineers in Huilongguan be fascinated by bicycle” raises awareness of the bicycle highway, which is currently under construction; ” One hundred people who live in Beijing” provides citizens with an intuitive understanding of the city’s demographic composition and inspires other cities to follow suit, creating their illustrations of demographic composition.

2. Architects who “Brainwork in Excess”

Wang Zigeng established Pills Architects as an exhibition and installation design studio. Even though the studio has increasingly expanded into architectural design, it continues to organize exhibitions to convey the studio’s concerns and present research findings outside of actual projects. “Manufacturing Human: Eve’s Choice” and “Artificial Nature: the Other Fruits” explore the interaction between humans and tools, examining how technology augments human skills with architecture as a result. Man produces tools. At the same time, tools modify the definition of man.

“1994”, a one-person “theater” installation with a personal narrative, is one of the artist’s most recent works. It is a retelling of Wang Ziegeng’s childhood memories. Their temporary residence was a single bed hidden behind the shelves of his father’s office, and the two “theatres” served as a location to gaze at but not touch each other. It is a way for people to communicate their reliance, antagonism, and regret in interpersonal relationships.

3. Architects who define the future

What will the world of the future show up? Numerous science fiction films and novels have imagined a world of advanced technology and industry. Moreover, what should architecture change in the future? Today, software assists in design; might software assist in the construction, or may machine take the place of humans? Several architects are engaged in robotics research and are attempting to define the future of architecture.

ROBOTICPLUS. AI is a construction technology business specializing in the development of intelligent robots and construction-related software. They can perform a variety of construction works and scene switching due to their modular hardware and software design, and they provide an excellent human interaction interface that enables construction practitioners to manipulate robots effortlessly. Their products encompass the complete process of design and construction.

During the design process, they built the software—ROBIM cloud platform, connecting the design directly to the industrial production equipment, allowing the robot to detect the building’s geometric information immediately. Additionally, it has a robust database for nodal optimization of the design. There are metal, wood, and composite factories at the factory production stage, each with a unique set of robots dedicated to a specific step of different materials processing. During the site construction phase, ROBOTICPLUS.AI developed the Capsule Factory, a mobile box-type building component production system comprised of a modular building robot processing station and associated hardware and software transported to construction sites for construction sites a variety of different types of projects to produce building components.

4. Architects who build the virtual world

There is much discussion about the “Metaverse” in today’s world, and it seems like there is a universe that will be extended from reality into our lives shortly. The term “Metaverse” first appeared in the 1992 science fiction novel “Snow Crash,” referring to a virtual reality world. Then, in such a world, those responsible for creating virtual buildings are less likely to be game designers and more likely to be architects.

Liang Qiwei, the founder of S-Game, earned a bachelor’s degree in architecture from Tsinghua University and subsequently pursued a master’s degree in architecture at Yale University in the United States. After returning to China, he secured financing from ZhenFund angel investor Mr. Xu Xiaoping and founded Beijing S-Game Network Technology Co. Ltd., where he developed the games “Rain Blood” and ” Shadow Blade”.

Liang Qiwei switched from architecture to game design because he desired control over the creation and designed freely in the virtual world. The synchronization of sensibility and rationality, the integration of art and technology, and the balance of design and implementation, all developed throughout the study of architecture design, may all be used in game production.

Architectural design includes a building’s form, space, function, and materials. When these elements are scaled from large-scale architecture to daily objects, these elements remain. Even the most simple items require consideration of the shape’s aesthetics, reserve space for use, and what material attributes are required. Thus, the architect can continue to be involved in the product’s production.

The studio’s core mission is “Manufacture, Life, and Aesthetics.” The studio’s primary focus is on technical research, product development, and customization in the areas of digital fabrication, model manufacturing, small-scale building construction, and exhibition design. The studio’s activity is equivalent to creating architectural derivatives.

ZAOME Studio conducts material research for the series “Three” which integrates concrete, a popular architectural material, into the objects, thereby launching “Xi” and “Zhi.” The “Three” series is a collection of objects that incorporate concrete, a popular material in building, into artifacts. “Xi” refers to some school supplies, such as paperweights and pencil holders; “Zhi” refers to other school goods “refers to plant containers capable of containing plants, and this product encourages consumers to pour their own. Additionally, they have transformed concrete into jewelry, keyboards, and other items.

The “Architecture flower container” series is a miniature representation of the architectural space. Each clear acrylic piece is placed on top of the other, resembling the method floors overlap in a building. The space within the flower arrangement container is analogous to the inner space supported by the building’s vault.

This article is part of the ArchDaily Topic: New Practices, proudly presented by PERI. PERI’s Future Products and Technologies’ department researches disruptive technologies that have the potential to change the construction industry fundamentally. The aim is to recognize the signs of the future and to help shape this future. Through a methodical approach, PERI thus expands its core competencies and acts as a clear pioneer on the market. Learn more about our monthly topics. As always, at ArchDaily we welcome the contributions of our readers; if you want to submit an article or project, contact us.