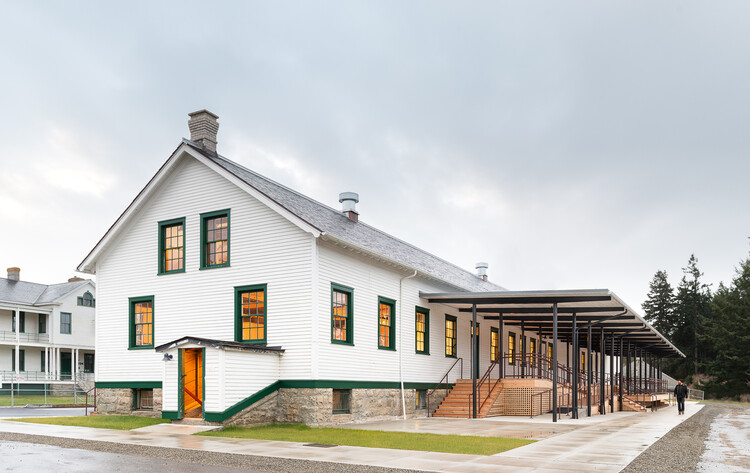 Text description provided by the architects. Built for military force, Fort Worden stood as an armed overlook, protecting Puget Sound coastal cities and shipyards from invasion during both World Wars. Today it stands as a Lifelong Learning Campus, using its place on the edge of the Salish Sea to amplify connections between nature, art, and community. Following a master-planning process, the Fort’s warehouse district was prioritized as the greatest opportunity for investment, and the vision for Makers Square, a trio of renovated warehouse buildings, evolved.

Building 305, at the heart of this district, was always a capstone structure for the Fort. Constructed in 1905, it was the first military building constructed at Fort Worden, serving as the Quartermasters’ Warehouse, overseeing the construction of over 600 buildings on the property. As the building is protected by the National Register of Historic Places, the design team established the goal of retaining as much of the existing building as feasible while updating the uses. This had a double benefit in telling the story of the place over time while reducing the carbon footprint of the entire project.

Used since the 1970s as a maintenance building, the stoic barn structure was suspended in a mono-functional state, composed of dusty workshops and a depository of historic relics and building materials. Design investigation began with a translation of the diverse materials and building patina to tell the story of 100 years of work. By honoring the building’s history, the rehabilitation simultaneously met the preservation standards of the US Department of the Interior and interpreted its working past while infusing the passage of time into the new spaces and inspiring new stories to evolve.

The methodical process of uncovering and revealing the history of the building resulted in confirmation of assumptions or new information that needed to be considered while the project was in the middle of construction, oftentimes stressing the project schedule and budget. The design team repurposed existing materials wherever possible to preserve the historic character and visually tell the stories of the past. Flooring removed from the attic to create the double-height gallery was reused on the main level, while salvaged bead-board from the ceiling was patched into existing wall and ceiling surfaces, creating a conversation between materials throughout the space.

The old-growth Douglas fir attic floor joists were carefully salvaged, cataloged, and milled into new stair treads and risers. The new programming and spatial concepts were deferential to the existing rigorous Doug Fir structure, adapting to the rhythm and scale that the structural bays allowed. Through the patching and grafting of old and new materials, Signal’s rigorous rehabilitation methodology took advantage of Fort Worden’s embedded carbon and reduced the amount of energy produced during construction. While Signal made thoughtful, research-driven changes to Makers Square, the beauty of the project lies in what was left behind.

Throughout the design process, Signal discovered markings made by the Fort’s former inhabitants. Instead of covering the building’s past, the design team opted to integrate it into the renovation. Now, when visitors step into Markers Square, they’re immediately presented with imprints of Fort Worden’s history. Exposed remnants of old paint colors, removed cabinetry, shadows of long-gone equipment, and abandoned stairwells create a time-traveling effect and tell the story of what was there before. This rehabilitation approach ignites curiosity about the building’s 120-year-long past and inspires creative action from its future guests.

Building 305 is Makers Square’s largest structure at 15,000 square feet, making it an ideal building to accommodate an art gallery and a variety of different art studio spaces. Originally composed of three levels—the main floor, a dimly lit attic, and basement—Signal added space and light by opening up the attic, revealing double-height ceilings and a gabled roofline. The new floor plan allows more headroom, space for larger artwork, and abundant daylight throughout the attic.

Signal divided the attic space into two writer’s workshops with interior windows overlooking the main floor gallery. The basement corridor, defined on one side by its sandstone foundation and masonry piers on the other, provided the opportunity to collaborate with Arup’s acoustic department to develop the headquarters for the local independent radio station KPTZ.