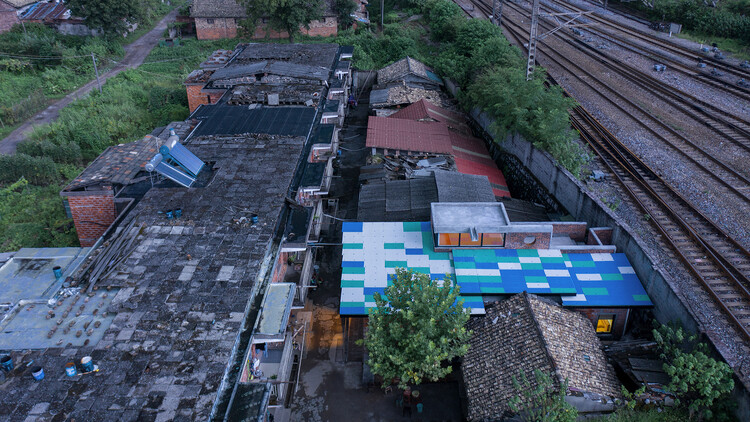 Text description provided by the architects. Located in a community built in the 1980s on the county border of Fenyi, Jiangxi, the old house has been standing there for over forty years. Time stands still in the community while the world outside has undergone radical changes. The house had been extended mildly several times over the years, but it is left behind by the time and a huge disconnect appears between the interior space quality and modern life. Lack of daylight and poor ventilation in the interior pose relevant safety concerns for the house owner who is of old age. Thus, improving the quality of life in the old house within a limited budget is set to be the key target of the project.

The original intention of the design was that the new house would remain part of the peaceful community after the renovation and keep a low profile in the neighborhoods. Therefore, the old building was not totally demolished and reconstructed. The strategy is to keep the original texture and boundaries of the building. Window openings and the entrance are reconsidered according to the new interior layout. On the side of the house, a small open courtyard is shared with the neighbor for daily leisure. Discarded red bricks in the courtyard are paved around the crooked tree and low pier for sitting. Cramped steps at the entrance are replaced by a brick ramp with a non-slip design and the metal handrail was assembled on the edge for safety concerns. The sensor light at the entrance also helps to reduce the inconvenience of moving around at night.

During the renovation, some parts of the interior walls were knocked down and the function of the rooms was updated from the original. The new plan is based on a ‘three-stage’ strategy – storage spaces, a multi-functional corridor,s and the main rooms (e.g. living room, bedroom) are arranged parallel to each other while all of them are perpendicular to the entrance façade. In contrast to the original narrow corridor, the renovated corridor space has been widened and is equipped with more functions. In the first part of the building, there are new coat racks, shoe cupboards, and storage space on the left side of the corridor while the right side maintains the previous function of the living room.

At the second ‘stage’, the corridor and the through-height cabinets are together formed a small dining room. Considering that there are usually two people dining at home, a sliding dining table has been designed that can be stored in the cabinet. The table can be dragged out to serve up to four. All witches in the house are set at a unique height according to the owner’s height and user preference. The master bedroom is located on the right side of this ‘stage’. The kitchen is the main space at the third ‘stage’, which is furnished in a logical sequence of cooking. The former small side window has been retained to allow natural light and ventilation. At the end of the corridor are the laundry and utility room. Two doors on the right side of the corridor leading to an accessible bathroom and a guest bedroom.

Apart from the main entrance side, the other three elevations are blocked by the surrounding buildings and walls, with very limited light accessibility, which results in dark and poorly ventilated interior space. The local climate is humid and rainy. The previous roof leaked very often and most parts of the ceilings and walls were occupied by mold stains. Therefore, it is necessary to solve the interior light, ventilation, and waterproofing problems through the renovation. The roof above the dining space was extended upwards to create a lateral light patio with electric opening windows to help to increase natural light and airflow in the rooms. The elevated space above the roof is connected to the retained roof terrace, creating an interesting visual communication between the interior and exterior in a vertical direction.

The original concrete roof is reinforced and the waterproofing layer has been designed. In order to avoid erosion of the walls by free-falling water from the flat roof, three PVC tiled roofs were added to the flat concrete roof. Each piece of roof rotates at a certain angle according to the surrounding buildings and trees. PVC roofs are cheap and easy to be replaced for solving potential problems in the future. But cheap materials do not mean boring. Using the white, light blue, and blue colors, a mosaic-like sky effect is simulated on the roof so that people will not feel visually boring either on the roof terrace or on the first floor on the other side. At the same time, the triangular sandwich space between the PVC sloping roof and the concrete flat roof creates an insulation layer by means of ventilation during the hot summer days to increase the comfort of the indoor living environment.