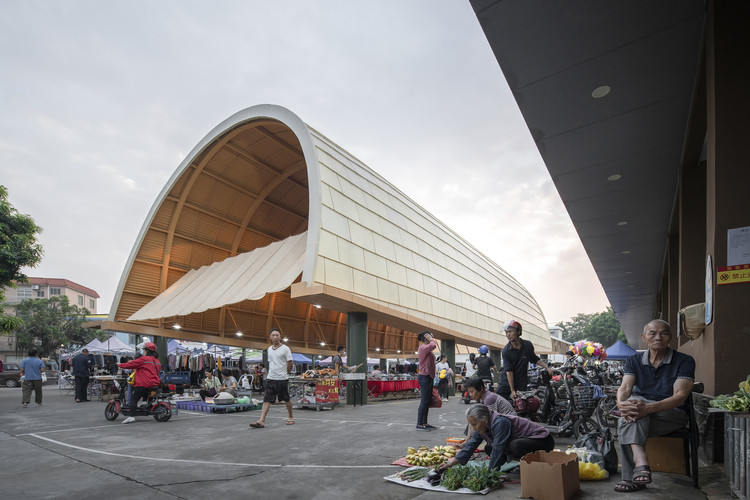 Village. Huangchong Village is a typical newly-built village,in the central region of the Pearl River Delta in Guangdong, China. A typical Lingnan village might be expected with the winding waterways. But as a matter of fact, two kilometers away from the upstream of the river, there is a traditional village that is more consistent with general imagination, covering stone bridges and ancestral halls in the late Qing Dynasty. And the place in the aerial photo is called Huangchong Village, where it exposes us to another practical context. It is a place difficult to describe in terms of preliminary understanding. Probably, it can be described as “wild” and “vague” place: It is a vital village filled with people and daily life. As a new village without the elements of traditional Lingnan villages, such as ancestral halls, iron sheets and tiles are major compositions, paired with the pragmatic atmosphere of small businesses. The ambiguity pervaded in the countryside of the Pearl River Delta is emerged from the street life and reacted upon the life here, which might lead to a loss of identity, though it is not a derogatory term.

The Market. The market is an open triangular space in the center of the village, in which the stall owners start their business at six o’clock in the morning, rest at noon, and then start the business again in the afternoon when it is pleasantly cool till 10 p.m. A variety of merchandise such as clothes, fruits, dried goods, kitchen utensils, electric bikes, herbal tea, and mats, etc. are sold in the market. A basketball court and a village auditorium are in the east of the market, with a village committee and a small park in the west, and a kindergarten in the south. In such a central location, villagers pass by the triangular area every day for various reasons.

A large number of young migrant workers lived in the Huangchong Industrial Zone in the village, making the hustle and bustle of the Huangchong Market. Then, doing business in the market was not as good as before for people flowing out of the village after the upgraded industrial zone, which is still a construction site. The demand for a new market emerged as the times require.

Sheds and Identity. From the observation of the triangular, we realized that the external form was more important than that of the internal, for the exterior can be directly impacted and superimposed with the “vague surroundings”, blending in market + residential house + food market + basketball court + kindergarten + fruit stalls + etc. With well-controlled results, people nearby will gain a new understanding of Huangchong Village, and even a sense of belonging for years. The form of external relations, in some degree, indicated that the building is embedded with some spiritual meanings, which is exactly the missing part in this type of village, according to our observation of the “newly built village”. At this point, we began to expect to construct a suitable but a bit surprising building on that piece of ground where is passing by constantly by villagers and to slowly develop a kind of identity in the surrounding environment.

Six Paths. The various paths to the village are what drew me to this triangular area. The quality and subtlety of the access to the village is a decisive factor for the daily experience of wandering around the village. On this basis, a monolithic volume was perceived, so that one could experience a unique, individual and transient observation of the village from different paths at varied distances. Especially for those who live here, such a unique observation can give them an experience featuring “from the ambiguity and above the ambiguity”.