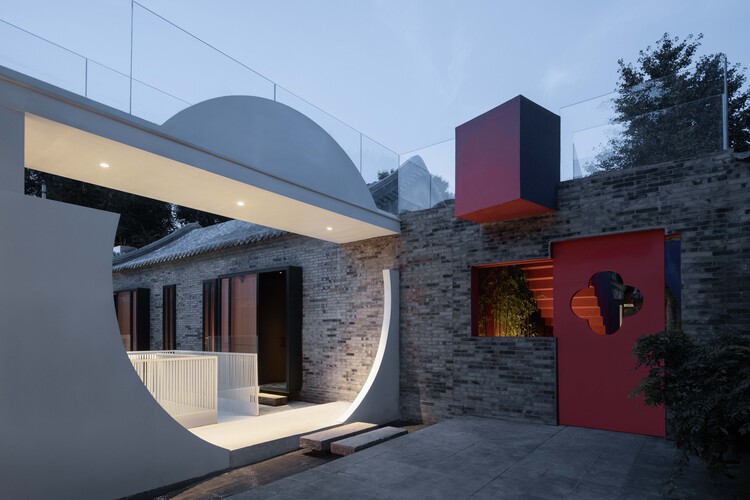 Unconventional Siheyuan. The project is located at No. 91 Beiluoguxiang, Beijing, with an area of about 1,400 square meters. The client is BeijingYIxizhidi Hotel. The site is a traditional but unconventional courtyard house, Siheyuan. It is the traditional two-tier courtyards in the central area of Beijing. The site is regular, and the surrounding buildings are also courtyard buildings. The unconventional part is that the site has a large underground space now, and a patio is lower level in the second courtyard, forming a special space with a unique double-height patio. The owner expects to transform this site into a space with a restaurant, afternoon tea, and homestay.

Architecture and Scene. Each site is unique, and the significance of the design is to give new possibilities according to its particularity. Therefore, considering the demands of the client’s brand and the current situation of the site, we propose the design concept of “the dialogue of interlocking new and old”. To begin the design, the intention is to create an architectural experience space with the encounter between the traditional space of Beijing’s old courtyards and contemporary space that conforms to the time and the present. In order to achieve this goal, we defined the entire site into “two courtyards, three paths, and three space colors”.

“Two courtyards”: Site Conditions. The existing site is two-tier courtyard buildings, the first tier is a café with afternoon tea space, and the second courtyard is planned to be a homestay space.

“Three paths”: Plan Layout. A set of roof corridor systems is inserted to unify the front and rear courtyard spaces, forming a spatial sequence of three-level paths in the sky, ground, and underground. The corridor system also provides more places for consumption. It generated three levels of overall space experience, one is climbing and looking into the distance on the roof, walking through the courtyards on the grounds, and exploring in the underground, which increases the variety of the experience.

“Three space colors”: Spatial Atmosphere. Red and green are the classic colors used in traditional Siheyuan. Once you enter, red and green are the main colors. The outdoor courtyard is a traditional red space, and the indoor restaurant is mainly green. At the same time, white is placed in the unconventional courtyard space in the second courtyard to form a contemporary homestay space experience.

RED. The first-tier courtyard is a traditional old Siheyuan in Beijing. It has a regular shape and retains the original screen wall, veranda, doors, windows, etc. We remained those original elements and repaired and restored the enclosed space of the courtyard, at the same time, we insert some new element designs.

Based on the shape of the original traditional door leaf, an innovative design is carried out. The whole door leaf is divided into two movable parts, upper and lower, which can be divided into windows and combined into doors. A moon gate is placed at the south corridor of the first courtyard, which is the main traffic node connecting the first courtyard and the second courtyard. At the same time, this moon gate is also the core connecting the circulation of ground and roof level.

GREEN. The main room of the first tier is the dining space, with “green” as the main color. The original roof was renovated, and the pavilions, corridors, lattice windows, and other spatial elements of the courtyard were placed in the interior, and new materials were combined to form a new spatial experience.

White. The second tier is a relatively private guest room area. The whole area is a special courtyard space surrounding the sunken patio in the middle. There are 12 guest rooms around the double-height courtyard. Each room is facing to the patio for natural light. We built a white moon-viewing platform in the patio, and the main visual scene is the moon-viewing platform, which has become a characteristic landscape that every guest room can see. A still pool surface is placed in the sunken patio, which can reflect the view. When the wind blows, the waves are sparkling, like the moon rising up from the sea.

Epilogue. This project takes the dialogue between the old and the new as the starting point. In the face of the existing conditions of the project site, it balances the old repair and the new renovation, so as to achieve the intention of the place that is full of new and unexpecting experience, although it is common in the past.